A bill to reinstate a mandatory helmet law for motorcyclists in Michigan was introduced on Oct 22, 2014, by Senator Rebeka Warren. 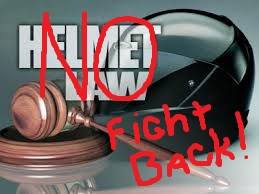 Passed 38 to 0 in the Senate on April 22, 2014, to revise details of a motorcycle operators license “learners permit,” which applies to license applicants who have not yet passed a motorcycle skills test and have not taken an optional safety course. Under current law the 180-day “learner’s permit” only allows riding under the supervision of a person who has a regular motorcycle license (“indorsement”). The bill would prohibit more than two such “learners permits” in a 10-year period.

Posted by Michael Clauson on
Categories : Environmental Protection Agency (EPA) Motorcycle Riders Foundation
Recently the Federal Trade Commission (FTC) proposed a new rule regarding the labeling of ethanol blended fuels in order to “help fuel purchasers identify the correct fuel for their vehicles.” Ironically, the new rule would exempt any fuel meeting the Environmental Protection Agencies (EPA) E15 waiver from the proposed labeling requirements.In the record section of the proposed rule, the EPA provides information under the “objections to the proposed labels” section openly stating that ethanol is harmful to motor vehicles, and specifically mentions that ethanol is damaging to motorcycles.The EPA indicates two major ways that ethanol affects vehicles. First, ethanol enleans the air to fuel ratio by increasing the proportion of oxygen relative to hydrocarbons. This can lead to higher exhaust temperatures and can possibly cause catalyst failure by gradually deteriorating emission control equipment. Next, other component failures can occur due to materials compatibility issues with ethanol use.The EPA also found, that ethanol can damage older conventional cars, heavy-duty engines, motorcycles, and non-road engines, explaining: “Older motor vehicles, heavy-duty gasoline engines and vehicles, motorcycles, and especially non-road products cannot fully compensate for the change in the stoichiometric air-to-fuel ratio as ethanol concentration increases. Over time, this enleanment caused by ethanol may lead to thermal degradation of the emissions control hardware and ultimately catalyst failure. Higher ethanol concentration will exacerbate the enleanment effect in these vehicles, engines, and equipment and therefore increase the potential of thermal degradation and risk of catalyst failure. In addition to enleanment, ethanol can cause materials compatibility issues, which may lead to other component failure and ultimately exhaust and/or evaporative emission increases… For older motor vehicles, heavy-duty gasoline engines and vehicles, motorcycles, and non-road products, the potential for materials compatibility issues increases with higher ethanol concentration.”The Motorcycle Riders Foundation has been attempting to block the widespread sale of E15 and higher blends until they have been fully studied. The MRF supports U.S. House of Representatives bill H.R. 875, a bill that would halt the sale of E15 and commission an independent scientific study to determine all of the effects of E15 on an internal combustion motor.The lack of demand for E15 has the EPA proposing that ethanol manufactures produce less ethanol than they have for the past few years.

Additionally a study done by the University of Nebraska, the third highest corn producing state in the country, found that using corn crop residue (considered a ready source for ethanol production) is harmful to the environment by generating more greenhouse gasses than traditional gasoline.

The Federal Trade Commission is still taking public comments on the labeling requirements. Simply slapping another label on a fuel pump is not the best way to prevent misfueling. Separate pumps, like diesel, need to be developed and installed. Let the FTC know that you don’t like the fact that fuels meeting the E15 EPA waiver are exempted, and more labels are not going to lead to less misfuels. The deadline is June 2nd and you can leave your polite public comments here: http://www.regulations.gov/#!submitComment;D=FTC-2014-0088-0001

More important than the labeling changes is the fact that the EPA is publicly admitting that ethanol is harmful to motorcycles, something the MRF has been stating for years. This revelation by the EPA is the sort of push we can use to rollback the sale of E15.